They say a loving husband is a very difficult creature to deal with. Well, in this case, a lady got it all wrong when her husband found her selling juice on the streets and instead of scolding her decided to park his car and join in. This beautiful moment was captured and posted on social media in a now viral video.

The gentleman identified as Afia Adutwumwaa had called it a day from work and was driving home when he suddenly bumped into his wife hawking drinks.

How it all happened

According to Afia, she had taken her business to the street without informing her loving husband.  She was unsure how he was going to react before he surprisingly joined her.

According to his wife, she didn’t expect that her husband would actually stop to help her sell her merchandise. She shared the video in a post sighted by Newslex Point on her personal Facebook handle.

Afia mentioned that she has been preparing Eku juice and decided to take a bold step and hit the evening streets of Accra with it. She was doing all these without getting her husband’s approval.

While lost in the trade, her husband suddenly stopped, parked his car by the road side and came in to join her. At that moment, the hardworking wife was disturbed.

According to her, she thought the man would probably ask her to stop or return to her usual joint.

In what turned out to be a huge surprise, the loving man joined his wife on the streets instead. The man was already tired from the day’s work already. But upon seeing his wife still roaming, he decided to throw in a hand of support.

“Ohene Kwesi, thanks for loving me unconditionally”, the over excited woman concluded the not-so-common story.

The world is still full of love and understanding after all. 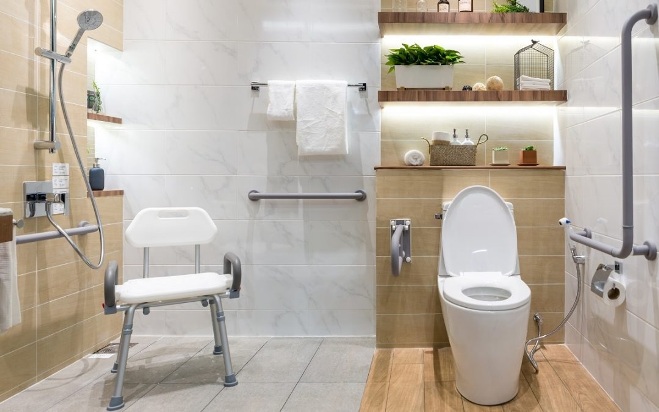 How Disabled Bathroom Designs Help People With Disabilities In Australia

If Australians have a disability that makes it difficult for them to use the bathroom, ...