Human rights advocate, Isaac Ssemakadde, is one lawyer who defies almost the codes and ethics of legal practice in Uganda and the judicial system.

From his dreads, dressing style, and choice of words, he’s clearly the prodigal son of the law.

Ssemakadde took to his Twitter page to reveal that he was sexually harassed by a police officer. The incident happened at the Buganda Road court. It was during the hearing of Dr Col Kiiza Besigye’s application for bail.

Kamuza feels an extreme sense of self-importance as he terrorizes his victims at the court premises.

“The mean guy in black is @PoliceUg ASP KAMUZA. He unlawfully fingered me today at court. @francis_isano caught it all on camera.
ASP KAMUZA is a newcomer. Fresh from cadet school, he was made in-charge Counter Terrorism Police at Buganda Road Court. He loves his walkie-talkie and the sound of his voice. Giving illegal orders to show importance. He flirts with impunity, victimizing court users at will,” Ssemakadde tweeted.

The lawyer narrated that they were outside court enjoying the best day of their lives. This was through taking selfies and soliciting money to pay for Besigye’s bail. It was then that Kamuza ordered them to stop flashing the FDC V-signs.

According to Ssemakadde, Kamuza’s juniors were reluctant to implement his orders. He however took matters into his own hands and pushed Ssemakadde roughly out of the court premises.

Ssemakadde also added that he peacefully put his hands up and urged Kamuza to arrest him. Because if he wanted to arrest him, he wasn’t going to put up any resistance.

Ssemakadde also thinks Kamuza wanted him to react angrily. This would warrant and justify his arrest satisfying Kamuza’s malicious intentions to detain and harass him. 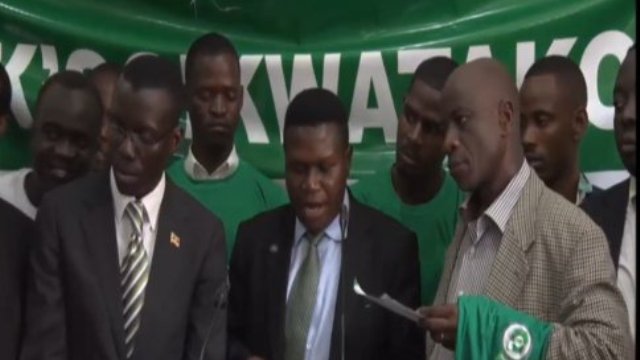