The consideration of reopening airport and open doors to tourism has excited many tourists, something that has given hope to many who had booked prior to coronavirus outbreak and suspending the international travel.

On Wednesday, 260 tourists who had already made bookings prior to the country’s pandemic lockdown, reported at the Katungulu entry point of the Queen Elizabeth National Park in western Uganda after the announcement.

The tourism minister, Butime Tom, said: “Visitors have started coming and tourists are excited at the re-opening of our gates.”

He made the remarks on Thursday evening while welcoming a team of European Union (EU) ambassadors and other delegates who visited Enjojo Lodge at Ishasha in Queen Elizabeth National Park in Kanungu district. Enjojo Lodge is under the Enjojo Wildlife Foundation, which is owned by Krist Debref.

The minister and delegates addressed journalists ahead of the opening of a ranger post and an accommodation facility for the newly trained rangers in the area.

The delegates, led by the EU head of mission, Atillio Pacifici, arrived at the site from Kampala for a four-day visit to the area.

They said the visit was meant to send a clear message to their home countries and to the rest of the world that Uganda had opened its doors to tourists.

Other delegates on the team were Dr Roswitha Kremser, (head of office of the Austrian embassy), Rudi Veestraeten (from Belgium), Jules-Armand Aniambossou (from France), Janos Tereny (charge de affairs of Hungary) and Massimiliano Mazzanti, the Italian Ambassador to Uganda.

Queen Elizabeth National Park is endowed with an assortment of wildlife, including tree-climbing lions, hippos, Uganda cobs, elephants, leopards. It is also gifted with a rich ecosystem, ranging from savannah to forests, lakes and wetlands.

Butime said many people in Uganda had planned to visit the park but were stopped by the outbreak of COVID-19.

“Those who had booked and are here in Uganda can now go to the parks. We are working hard to see that the airport is opened so that other tourists who had booked come,” the minister said.

Butime said the country would ensure all tourists follow the health ministry guidelines to stop the spread of COVID-19.

“There is already an intervention from the Government to assist the tourism sector, especially the hotel owners, but we shall have to encourage domestic tourism and when the airport is opened, we hope to receive foreigners as well,” he said.

“But coronavirus exhausted our hopes, which we need to rebuild afresh,”he said.

The minister said last week he met EU delegates and agreed on a number of issues, among which was tourism.

Butime said the ranger post will avail accommodation to personnel who protect the park, which he said was facing a lot of pressure from intruders.

“We had to train paramilitary personnel to protect it from poachers,” he said.

The area shares a porous border with conflict-riddled eastern Democratic Republic of Congo;

Pacifici said the EU funded the construction of the ranger post to send a message that they were keen on supporting the tourism sector, a pillar in the national economy.

The ranger post, according to Pacifici, was financed to protect the park and Virunga National Park in DR Congo.

Pacifici is optimistic that the country’s economy would recover since Uganda had done well in managing the COVID-19 pandemic.

He said the ranger post cost $1.3m (about sh4b), which was a joint venture between the EU, International Fund for Animal Welfare and other stakeholders.

Pacifici questioned the proposed construction of a dam at Murchison Falls.

“Why do we need to build a dam at this site?” he asked. Other concerns were the construction of wide roads and sugar plantations in parks. 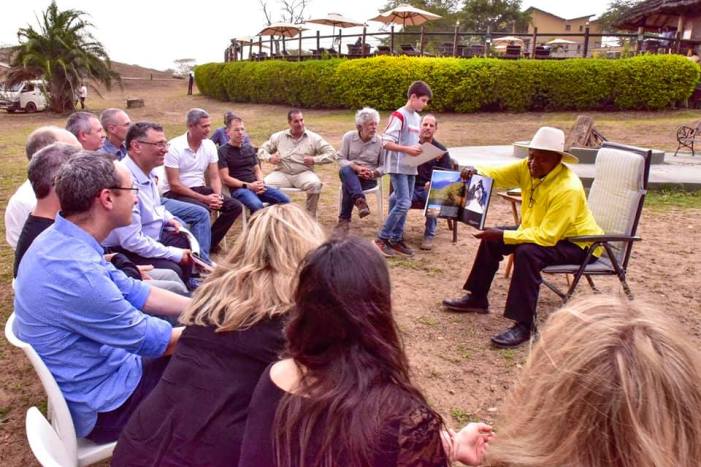