Many fear to get into marriage institution following many divorce cases in East Africa and around the world. This Kenyan woman identified as Kagendo Gladys did not feel ashamed of boldly revealing to us how her marriage ended after a period of just six months.

Kagendo told us her separation story which has one or two things in common after having a critical look of it.

During an interview with Betty Bayo, this woman revealed that her Afrosinema marriage (as she termed it) failed after a period of only 6 months, something which she blames herself for.

Kagendo disclosed that she got so many warnings telling her to exit the marriage, but she was love blinded.

“We dated for 5 years and in 2017, he proposed marriage. We officially wedded on 8th July, 2017, and on that day, I got a chance to be carried by the only Range Rover in Embu. We spent close to KSh500,000 ( approximately Ugx17.5 million) and at the time I was 8 months pregnant. This is when I stopped watching Afrosinema after shooting my own,” said Gladys.

Gladys mentioned that she does not blame anybody but she blames herself since she experienced the warnings.

The 29 year old woman revealed that her ex-husband had an affair with other women and that he would shamelessly cheat on her even when they were dating, but she could always forgive him.

She loved her ex-husband so much to an extent that she decided to proceed with the wedding ceremony despite the fact that he would cheat on her.

“On our wedding day, he appeared late. After reciting our vows, we went to our seats and the entire time he was on his phone chatting. When we went for the bridal photo shoot, he would not concentrate and I asked our best couple to take me home. They confiscated his phone and while at it, I knew I was done,” Gladys added.

She revealed that she had earlier hacked her ex-husband’s phone.

The pretty mom revealed that as she tried to make everything work, she hacked her ex-husband’s mobile phone and she would receive all text messages from his side chicks.

“I had hacked into his phone. You know all those apps like Whatsapp and Facebook. He would be seated on his seat chatting and I would also read all the messages straight from my mobile phone. I could not reply because I did not want to be caught. I advise women to never hack their partners’ phones unless they have shock absorbers on,” said Gladys. 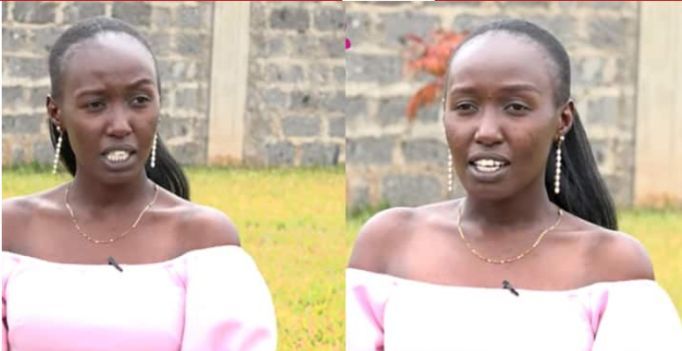 Woman Who Turned Down Several Marriage Proposals In Her 20s, Says She’s Still Single In Her 30s

A Kenyan woman identified as Nduta Miriam has narrated how she rejected various marriage proposals ...