Museveni Is Happy For The Numerous Developments In The Country

President Museveni Spent the whole of yesterday afternoon checking on his people of Katerera Constituency in Rubirizi District. I am here to discuss with wanainchi the progress of government programmes and find solutions to peculiar regional challenges,’’he said.

I am glad to observe that families are heavily involved in commercial farming, with spring onions, coffee and bananas, as key outputs. The weather and terrain here is also good for fruit-growing and dairy-farming, which I encourage the residents to embrace,’’he added.

The beautiful multiple crater lakes that dot this place are being clogged with algae, manifesting in the green colouring of the waters. This is due to poor farming methods, cultivating right up to the water.

The president advised that there must be a distance of at least 100 metres between the gardens and the lakes. Otherwise the water bodies will be silted and cause bigger problems.

He said he’s tasking agricultural officers to take sensitization messages to churches, mosques and radio stations in the districts they are deployed in or they will be rendered jobless.

The other key issue is the conflict between the community and wildlife authority officials. Whereas government discourages poaching, we shall not tolerate shooting of individuals by game rangers. Our people need sensitization, not to be killed. The relevant agencies should take note,”Museveni noted.

A 10km buffer zone is going to be created between the people’s settlements and the Queen Elizabeth National Park. The works are expected to begin in December and will continue over the next five years.

President Museveni said the works on Ishaka-Kasese highway are ongoing and we intend to start on the 242km stretch connecting Kabwohe to Kyambura through Bwizibwera, Nsiika, Ibanda, Kabujogera,Masyoro and Rwenjaja.

All other roadworks in the meantime will be undertaken by the district to reinforce their usability as murrum roads.

I shall be back in the district tomorrow, to engage residents of a different constituency,”he added. 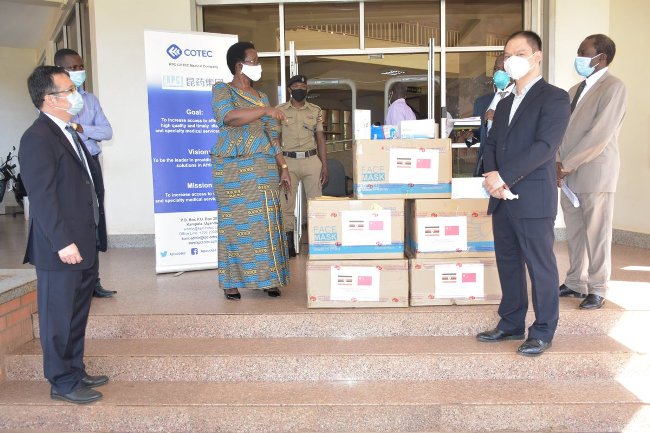 In an effort to provide medical health commodities during covid, Chinese based company, KPC COTEC ...