Celebrating world environment day on 5th June under the global theme for “Celebrate Biodiversity” warned that Uganda’s biodiversity is under serious threat due to several factors mainly human induced activities like clearing land for settlement, infrastructural development and agriculture which has led to habitat loss reducing Uganda’s celebrated position of being one of the most species rich countries on the globe.

According to the national biodiversity strategy and action plan II 2015-2025, Uganda is losing its biodiversity at an alarming rate. Forest land which is currently estimated at 16% of Uganda’s land surface declined from 20% in 2001, with a loss of over 200.000 hacres per year leading to a great loss in forest diversity.

“The loss is attributed to deforestation, diseases and pests, urbanization and industrialization and encroachment for grazing livestock If this continues unabated, the climate crisis will be unbearably scaled up,”Odoy noted.

Adding that biodiversity loss in the wildlife sector has also been recorded due to the conservation areas being invaded by human beings through encroachment for cultivation, grazing and poaching. This has caused a big conflict between the wild animals and human beings leading to death and destruction of property and habitats.

The NBSAP 2015-2025 indicates that, wetlands which are estimated to cover about 10% of Uganda’s land area have also been pounced on. In eastern Uganda, 20% of the wetlands have been destroyed, in the west 3.6%, central 2.8% while northern Uganda 2.4%. This loss is due to encroachment for agriculture, drainage for settlement and infrastructural development especially in the central region, pollution and over-harvesting or exploitation including over fishing.

According to the Min of Water and Environment, Uganda loses biodiversity between 10-11% every decade and a research carried out by IUCN in 2008 shows that 34 species were extinct, 4 wild animals (Orxy, black rhino, northern rhino, white rhino, Derby eland) are extinct, 28  are critically endangered, 36 endangered and 54 threatened. The over 1000 bird species in Uganda, which attract a lot of tourists, are also not so safe with encroachment on their habitats. NEMA in 2007 found out that 10 bird species are under threat including the Blue Swallow, Shoebill, Grauer’s rush.

It is important to note that life’s support system is anchored on biodiversity which is the basis for all eco system services, playing a critical role in maintaining and enhancing the world population as it supports many basic services for humans. Therefore, the effect of diversity loss is costing the country a lot of income and several other values like clean water, clean air, food, medicine, employment, recreation, pollination, and cultural philosophies.

Odoy however reasoned that failure to provide good governance in the management of this resource is causing invisible but unbearable harm.

“The World Environment Day should therefore be a reminder to the government of Uganda to take action. Having good laws and policies is not enough. Get them implemented without fear or favour. Cutting down of trees in the forests under the guard of armed personnel, reclaiming of swamps for whatever purpose by the “untouchable” and burning of bush should stop,”he explained.

He added that citizens should know that business cannot continue as usual. Change in attitudes and actions must be embraced.

Destructive and unethical activities must stop. Avoid vandalizing, traumatizing and destroying nature. Love and be friends with nature. You will not regret and you will be respected by nature. It is unfair and an act of injustice to destroy biodiversity when there are generations to come. Let us not leave a difficult world for them to live in. They should and must find a world that is favorable to live in. 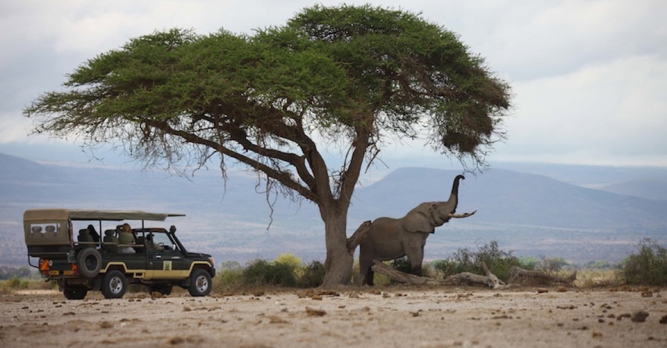 Kenya was voted the world’s top safari destination for the second time by World Travel ...