The 11 year old Swedish boy identified as Mwagwaya Daudi Oscar has been all over news headlines after he has become part of Tanzania’s  Maasai community.

Check also: Why Some Kenyan Men Are Forced To Rent Out Their Wives To Tourists

The Mzungu little boy who came from Sweden has been staying with the Masaai community for more than 7 years and he has embraced their lifestyle and culture.

During an interview with BBC on Sunday, the Swedish boy said it straight that he already chose to live with the Maasai community the rest of his life and he is not interested returning back to his mother land.

He has become part of them after learning their lifestyle and culture, beginning from their language, dressing and also likes their food.

In another interview with Global TV, Oscar narrated that he traveled to Tanzania alongside his young sister and mother.

This happened after Oscar’s mum fell in love with a Maasai man, who was employed as a security guard in Tanazania’s capital, Dar es Salaam.

The boy also wants to engage in farming and also livestock keeping just like the real Maasai.

However, he stated that many Maasai Tanzanians like him and others hate him because he chose to live in the Maasai community rather than going back to Sweden where there is good standard of living.

Meanwhile, In other news earlier reported by NEWSLEXPOINT.com, the Maasai man identified as Ntoiyai Koruta, cooking for his Italian wife Gaia Dominici and their little girl is one of his favourite things to do as a husband.

Dominici said her husband cooks because he literally detests her cooking. But wait a second, isn’t Dominici a descendant from the land of pasta? She definitely is, but whatever the Maasai man says, he has his own reasons. 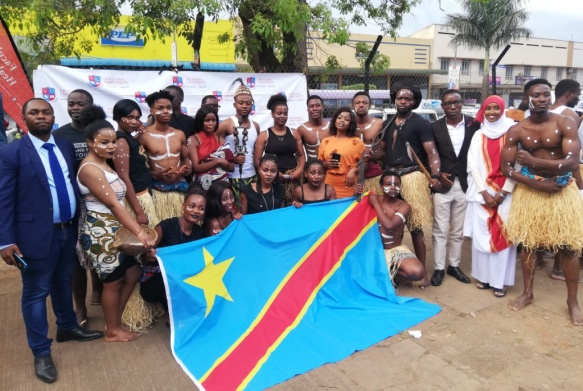 Organised under the theme: the diversity of Victoria University culture  as one student exhibited unique ...