Outside Kahawa House on Haile Selassie Avenue in Nairobi where the Kenyan church JTM is located, business is booming even though it is only 9.30am on a Sunday.

Traders use all manner of tricks to entice passers-by into buying slices of watermelon and pineapple or bottled water.

But most pedestrians are in a hurry as they are running late for church at this Kenyan church called Jesus Teaching Ministries (JTM) at Kahawa House.

Inside the building, another business is thriving.

To get a prime sitting space with a good view of the pulpit at JTM – as members call it – you have to be at Kahawa House as early as 4am.

By 9am, the building is full to the brim.

I arrive at the Kenyan church some minutes to 10am.

Singing can be heard as one approaches.

A team of five, with reflector jackets inscribed “Guest Relations Officers”, waits at the gate.

As we are being frisked and checked with a metal detector, one “Guest Relations Officer” asks those visiting for the first time to follow her.

Ten of us honour the call.

The young man leads us up a flight of stairs to a room where visitors are received.

He hands us over to another team of about 15 people.

Those in this group are wearing T-shirts with the words “Guidance and Counselling”.

A young woman shakes my hand and introduces to me to what she refers to as prophetic tools. She says I need these to “break from the snares of the enemy” — the devil.

The tools include a pencil and a pen, each going for KSh50.

There is also an adhesive label reading “JTM Ministries” that I am to stick on my bed for it “drives out evil spirits”. The sticker goes for KSh100 and so does the “anointing oil” in a tiny transparent bottle.

“We also have the special anointing oil. This one is very strong and efficient but you need to apply it twice a day and fast for seven days. It goes for KSh1,000,” she says, showing me a bottle.

Unfortunately, buying the “prophetic tools” is not enough to ward off the bad luck.

Apparently, I need to “dedicate” myself with at least KSh1,000, present my visions with at least Sh500 and dedicate them with an amount not less than KSh1,000.

After all these, I can present myself for special healing and deliverance with KSh3,000.

“If you want to meet the apostle of this Kenyan church in person, you pay KSh5,000 and you are given an appointment,” the woman continues.

My host then hands me three envelopes in which I am to place the self-dedication, vision and vision-dedication cash.

She then introduces me to another woman, who asks for my identity card and background.

She wants to know about my parents and siblings and if any of them has a problem that needs to be prayed for.

I’m then made to sign a form allowing the church to broadcast my testimony upon getting a “breakthrough”.

And the church is huge.

Apart from the main hall on the ground floor, it has four more floors, each capable of holding around 300 people. Every auditorium has more than 10 TV sets.

The “shepherd” is in a white suit.

He moves from one auditorium to the other promising prosperity.

“Pay for special healing and deliverance instead of booking an appointment with the apostle,” the woman seated next to me on the fourth floor advises when I inform her that it is my first time in that church.

“When you go to see the apostle, you need to be strategic because the queue is usually long, so he only listens briefly. You get more time with the apostle during the special healing and deliverance session.”

The pastor spices up his sermon by shouting.

As he moves across the halls, the congregants cheer in excitement. Some whirl around clapping while others jig.

As he concludes the sermon at 1.30pm, the pastor directs us to make a sign of the cross on our foreheads with the anointing oil.

He then prays for a minute or so, urging the Holy Spirit to descend.

He stretches his hand and hisses like a snake. The crowd is in a frenzy.

A woman lets out a shrill. Another falls on a man who is twirling and a plastic chair breaks somewhere. The one on my left pushes another away to prevent her from hitting her baby.

A child begins wailing uncontrollably two rows ahead. The boy’s mother, with hands raised, is shrieking. The child wants his snack unwrapped.

At the pulpit, dozens are rolling on the floor. At one point, the pastor bends to one woman and commands the “devil” to come out of her. The woman responds: “How?”

“Nimemfunga! (I have bound her)” Pastor Manyuru says, laughing hysterically.

Church members believe there are demons in the woman fighting the “man of God”.

“I came here because I haven’t had a job for four years. Where am I expected to get the money for dedication?”

I whisper to the woman seated next to me when things go quiet. The question makes her frown.

“You have to make sacrifices,” she says, quoting a verse about dedication in the Bible and looking shocked that I don’t know this.

“You don’t expect to break the yoke of joblessness with KSh100 when an enemy has probably used more than KSh100,000 to bind you.”

She advises me to take a loan from one of the many money-lending apps.

She had just returned to the country from the United Arab Emirates, where she was a waitress.

While there, Ms Nduta says, she would faint frequently for no apparent reason.

She was sure someone was impeding her success. She went looking for help from Pastor Manyuru’s church.

“I bought the prophetic tools and did all I was asked to, including fasting and making the way of the cross before leaving the house and in the evening,” she says.

She spent KSh20,000 to fulfil these. Ms Nduta is now a hairdresser, a craft she mastered before joining this Kenyan church JTM. She thanks the “apostle” for that.

Besides his wedding photos posted online in 2017, little is known about Manyuru’s family or his background, though he founded the church in 2006.

In 2015, the ‘man of God’ came into the limelight after a certificate exposé scam at Nairobi Aviation College, of which he is the chairperson.

Then he slithered away from the public eye and hid at Kahawa House where he patiently awaits for those looking for hope.

At the end of the service, which lasts about four hours, the walk down the stairs is treacherous.

Those going out push and shove in a hurry to get out, a strong stench, emanating from the toilets envelops the stairway.

Just before you reach the gate of this Kenyan church, an array of “prophetic tools” are displayed for sale. 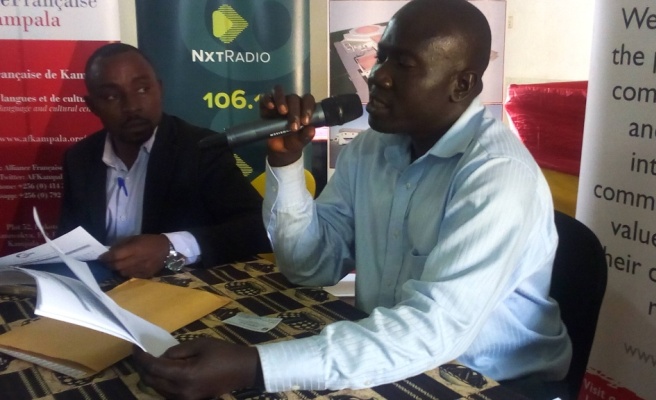 Meseum activists under their umbrella organisation,The Community Meseum Association are calling for special fund for ...